Ski Touring from Hut to Hut in the Swedish Wilderness.

Above the arctic circle, in the swedish Laponia, is hiding a well kept secret. The Kebnekaise, highest top in Sweden (2106m) and the mountains around are an amazing ski touring playground. There is a cliché in southern Europe that the swedish mountains are just hills...but here, you'll find everything from the mellow, beginner friendly runs, to the ski mountaineering terrain with sharp ridges, deep couloirs and steep terrain.

Combined with the arctic climate and a network of great mountain huts, this itinerary has nothing to envy the most famous haute routes from the Alps! 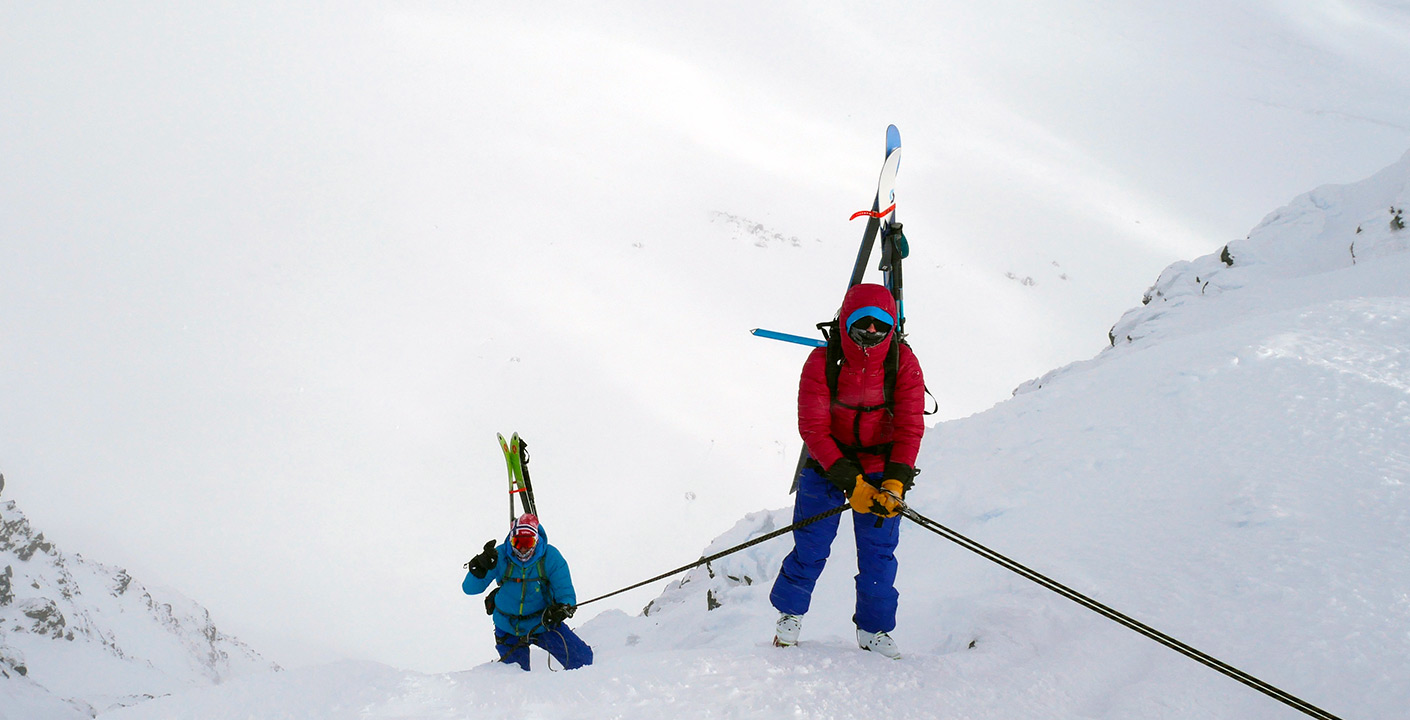 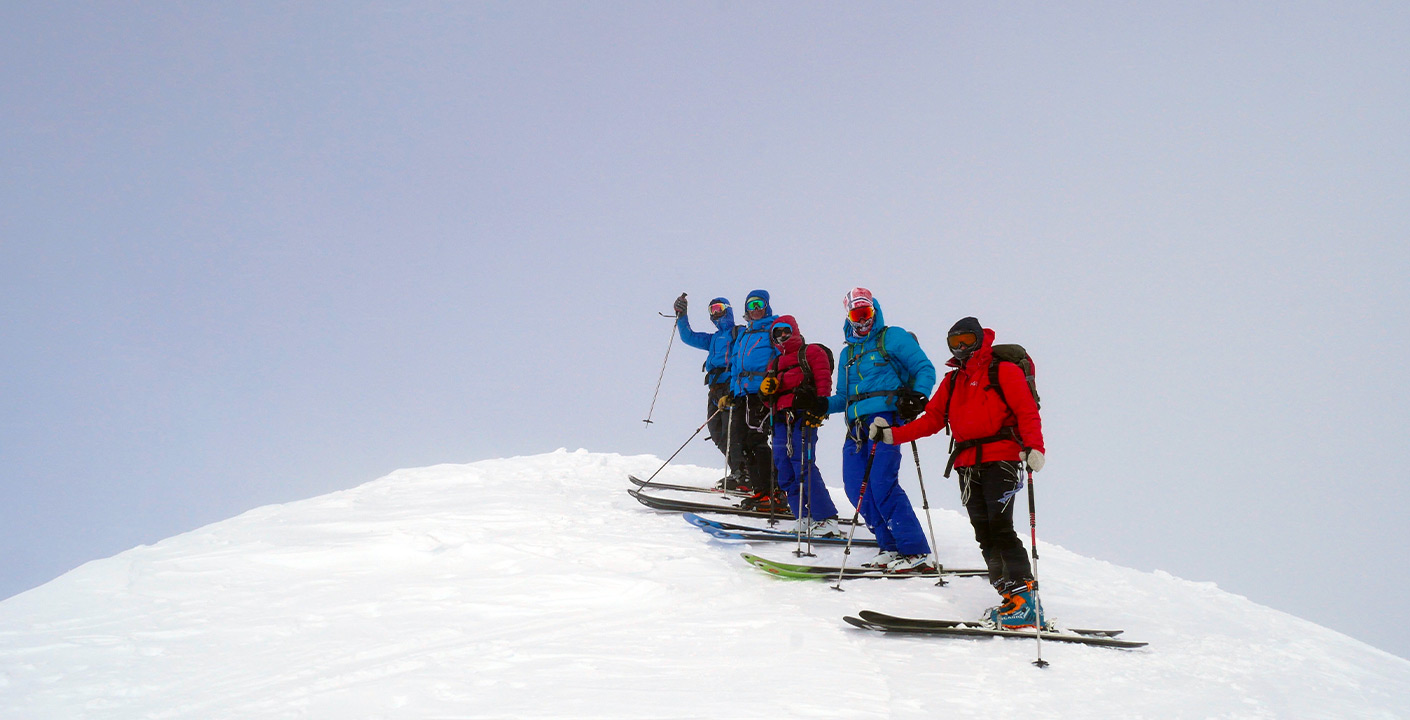 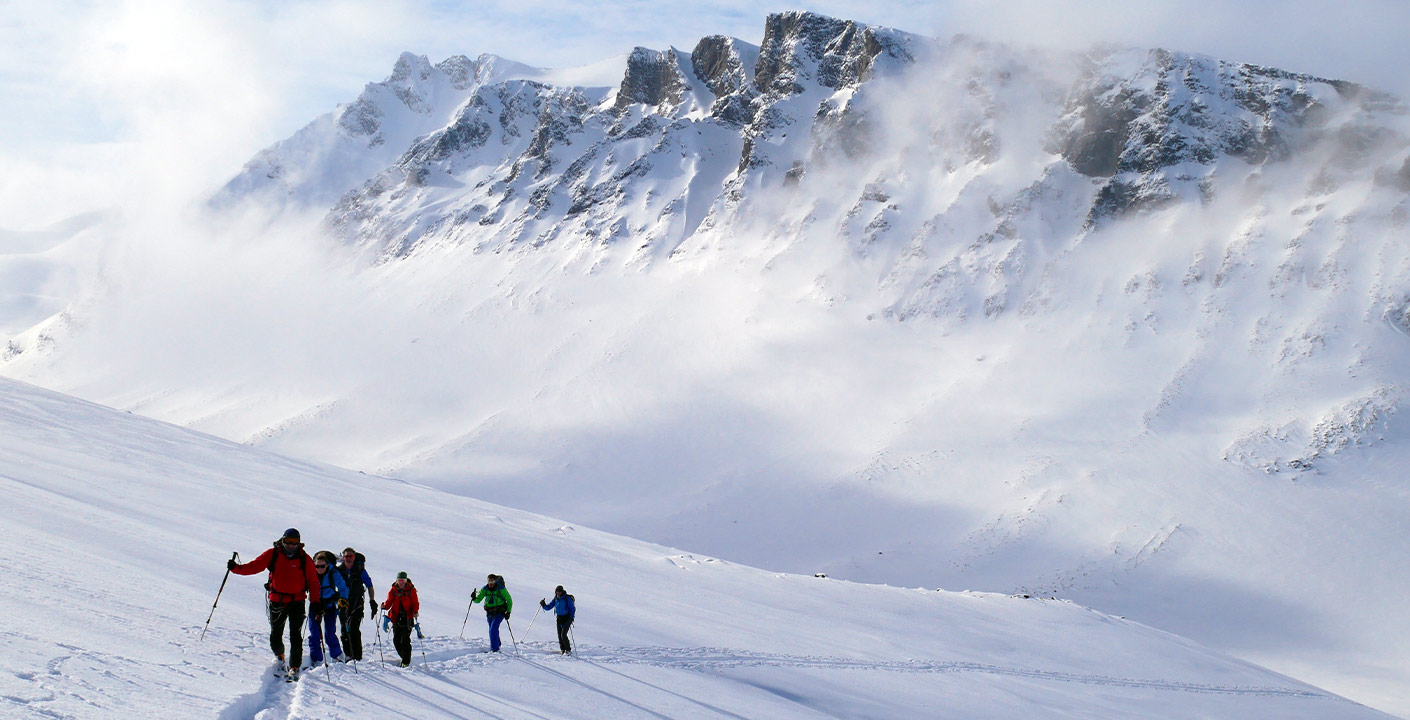 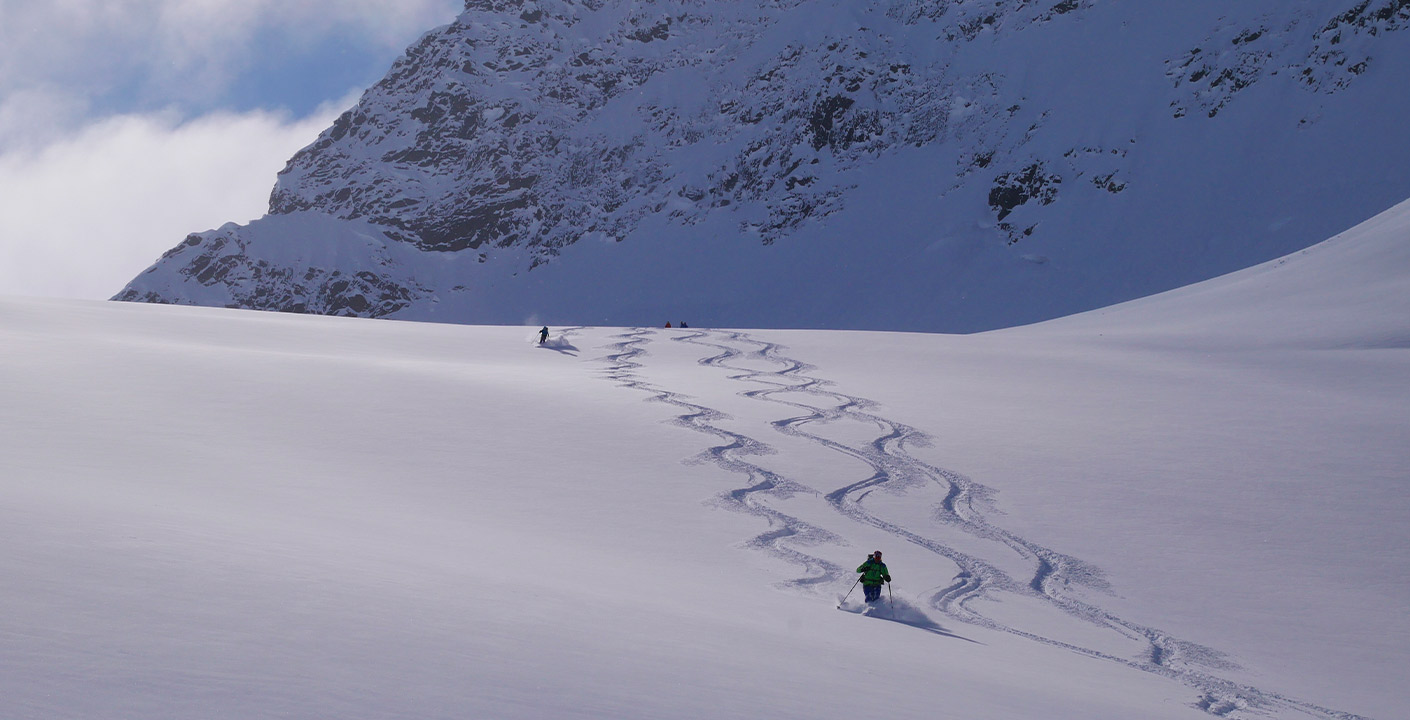 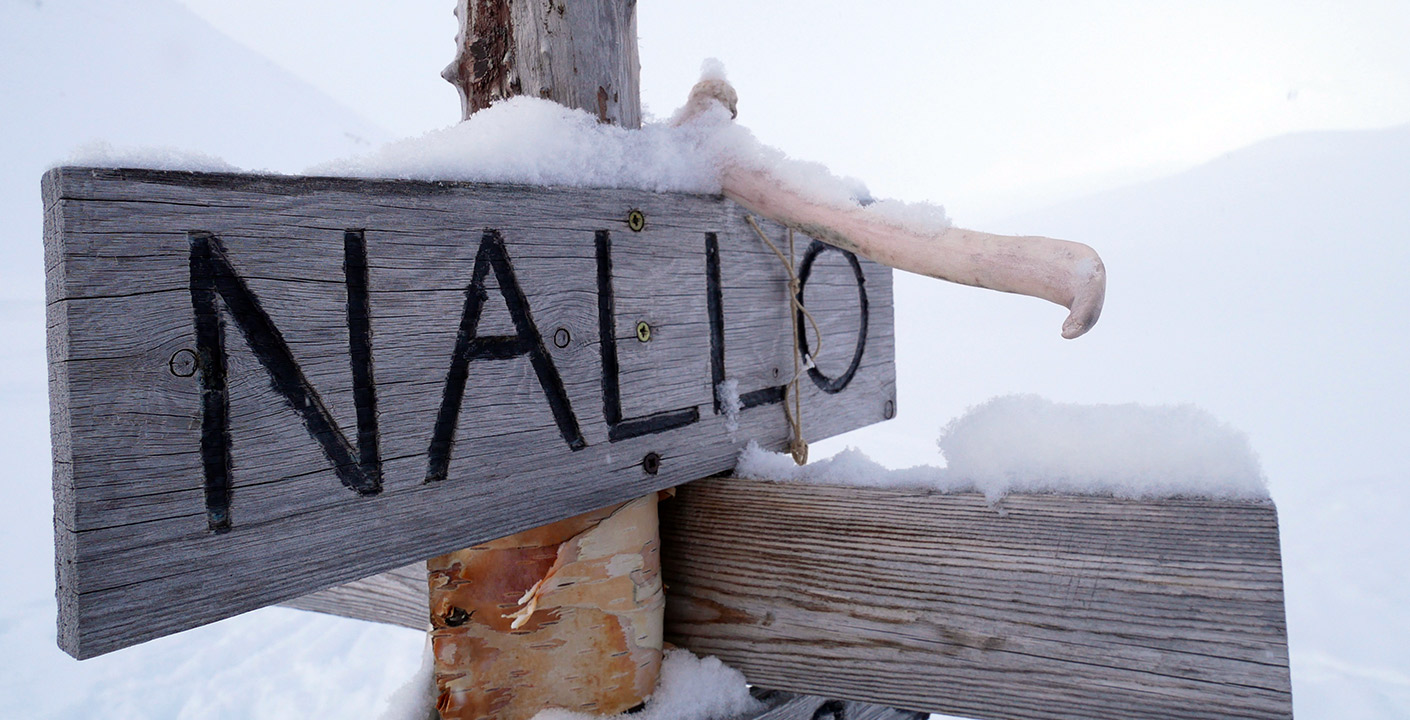 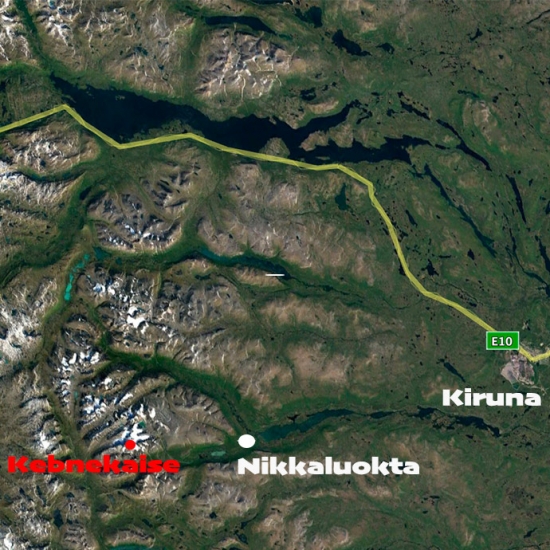 Located to the west of the city of Kiruna, the Kebnekaise mountains are hosting five of the twelve 2000m tops in Sweden:

This major range is also where you find the biggest glaciers of the country, and some amazing mountains for ski touring!

How to get there?

From Stockholm, there are three options to reach, first, the city of Kiruna. You can drive, fly or take the night train. Driving is to long, flying is too fast, and sleeping in a comfortable bed while the train is taking you across the deserted regions of Northern Sweden is just perfect!

Once in Kiruna, you will need to take a bus or a taxi to the small village of Nikkaluokta, approximatively one hour away from Kiruna. We can also pick you up at the train station.

From Nikkaluokta, a snowmobile service can take you to most of the surrounding mountain huts (Kebnekaise Fjällstation, Tarfala, Singi, Vistas, Nallo or Sälka). Of course, you can ski to these huts, even if the way is long (19km for the nearest, almost 40km for the fathest).

Day 1 :
Arrival in Kiruna. We pick you up in the morning at the arrival of the night train and drive straight to Nikkaluokta (approx 1h)
From there a snowmobile is taking us to the hut of Nallo. During the rest of the day we will practice some safety drills, do our assessment of the snow conditions and plan together for the next day. Chopping wood, fetching water and cooking are of course part of a classic day in a swedish mountain hut!

Day 2 :
Ski touring around Nallo.
Welcome to one of the best ski mountaineering area in Sweden! Surrounded by big mountains offering both gentle sides and steeper couloirs, Nallo is a true paradise. From the hut we can ski Sielmatjåkka, one of the twelve 2000 tops of the country, and many other smaller but not less interesting mountains.
Night in Nallo.

Day 3 :
Nallo / Tarfala
We'll be following the long and  classic route called "Jojoleden", and just like the toy the route is named after we'll be going up and down not less than 3 passes before going down to Tarfala Mountain Hut. The landscape is typical of the arctic mountains, with wide open valleys, long flats and massive peaks around us.

Day 4 :
Ski Touring around Tarfala.
Tarfala is a famous name in Sweden. This valley at the foot of Kebnekaise's east face is hosting the major swedish glaciers, a research station and a very alpine environnement.
From there, the choice is big: easy cruising on the left side of the valley (Tarfalatjäkka), famous couloirs (liljetoppsrännan, drakryggen), galcier skiing (storglaciären, isfallsglaciären and so on), or even Kebnekaise via Östra Leden or Halspasset. The conditions may vary, but there will always be something to do.

Day 5 :
Tarfala / Kebnekaise Fjällstation
By the valley of Tarfala this is only about 8km going slighly down, so this is a way we will use only in case of very bad weather. Otherwise there are plenty of skitouring options to have a long day out before reaching the comfort of the mounatin station with its nice rooms, great restaurant...showers and sauna.

Day 6 :
Ski Touring from Kebnekaise Fjällstation.
For our last day on skis we will have the choice between skiing Kebnekaise via Östra Leden (if not done already) or skiing a legendary run like Tuolpagorni and it's impressive crater shaped slope only accessible by rappeling. The choice is yours!

Day 7 :
Early snowmobile back to Nikkaluokta and road back to Kiruna.

-6 days ski touring with an IFMGA Mountain Guide, in a small group of 6 persons maximum.
-All transportations from / to Kiruna (Bus, taxi, snowmobile)
-Lodging in mountain huts for 6 nights
-Food for the duration of the trip

-Your travel to Kiruna
-Drinks
-Your personal insurances